With resources to complete multiple landscaping projects on time, we strive to provide the highest-quality customer service of any landscaping company working in and around the Minneapolis - St. Paul area. Meet our landscaping experts -- 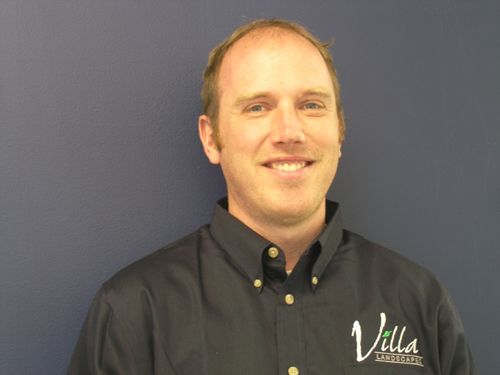 Scott Arnold joined Patio Town in 2001, while earning a Landscape Design and Construction degree at Hennepin Technical College. As his responsibilities grew, he earned a promotion to store manager and then to his current role as operations manager at Villa Landscapes. Scott draws on his experience working with both retail customers and landscape contractors. "I really enjoyed working with homeowners and helping them from start to finish," said Scott. "As operations manager, I work more behind the scenes with our designers and contractors to make sure that the customer has the best possible experience working with us." Scott lives with his wife, Megan, and three sons in Brooklyn Park, Minn., and they enjoy fishing, canoeing and spending time outdoors. 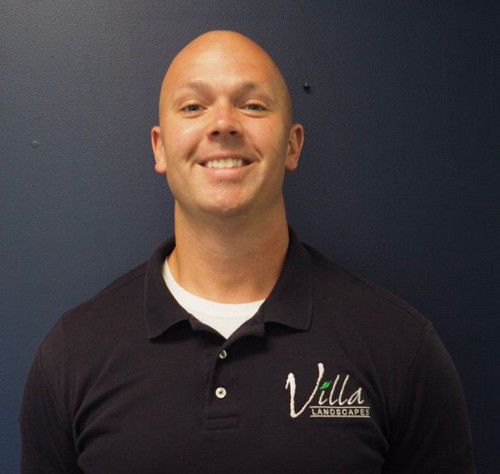 Born in a family of landscapers, Andy started landscaping at age 15. He went on to get a degree in environmental design from the University of Minnesota. With more than a decade of hands-on experience, he brings an impressive array of design/installation talents to the Villa Landscapes. Andy’s portfolio includes stunning hardscape designs, outdoor kitchens, spas and other outdoor living areas. He has an eye for integrating elements—paver patios, retaining walls, freestanding columns, stairs, walkways, gardens, pergolas and water features—into a cohesive landscape design. Andy has won landscape awards from the Interlocking Concrete Pavement Institute and the Minnesota Nursery and Landscape Association and is certified by ICPI and the National Concrete Masonry Association. From full yard designs to specialty gardens, patios, retaining walls, fire pits and water features, Kelly can bring your vision to life with a landscape suitable for our northern climate. In addition to her landscape design skills, Kelly brings a green thumb to Villa Landscapes. She has a degree in Landscape Design and Construction with an emphasis in horticulture from Hennepin Technical College. Kelly also is a Certified Professional with the Minnesota Nursery and Landscape Association and a University of Minnesota Extension Service Master Gardner. Kelly puts her horticultural skills to work as a U of M Tree Care Advisor and a member of the advisory council for the Muriel Sahlin Arboretum in Roseville. She's the go-to person at Villa Landscapes for questions about plantings, trees or shrubs. 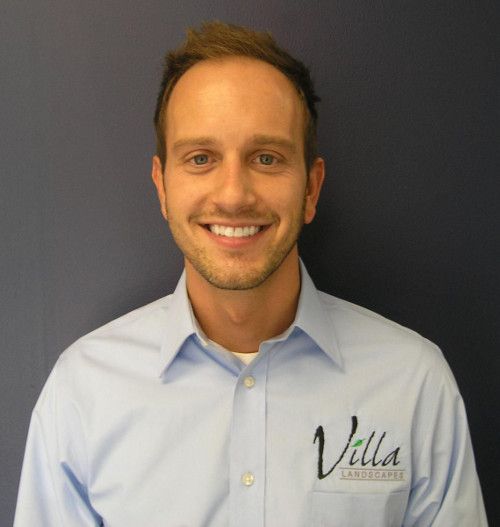 Lonny has a wide range of landscape design skills as a graduate of the University of Minnesota with a degree in Environmental Design and minor in horticultural design. Lonny formerly managed the residential landscape division of a landscape and garden center, where he honed his skills and developed a passion for working with homeowners. He knows the landscaping process from conception to design and through installation and completion, and he treats each project as if it were his own. He specializes in low-maintenance landscaping and particularly enjoys adding curb appeal to homes through front-entry makeovers. Lonny uses a variety of design software to turn his clients’ dreams into reality and offer them options in hardscapes and plantings. Nick has worked almost every position in the landscaping field, and that perspective, he says, gives him an advantage when creating living spaces and solving landscaping problems for clients. “I love solving problems by creating useful space. When you solve a problem creatively, it can make a dramatic difference in how the space functions or looks and how it feels,” Nick says. The Rosemount (MN) High School graduate worked in grounds crew maintenance and sales and as a landscape crew foreman, nature center intern and landscape designer while earning his Bachelor of Environmental Design degree at the University of Minnesota. One of his first jobs involved interior designers, architects and landscape designers, who worked in concert on lake properties. “In addition to being exposed to lake life and style, the experience gave me a holistic approach to design,” Nick says. Nick and his girlfriend are renovating a condo in Apple Valley. “Lots of people just want to solve a landscaping problem, and the other half want to create a useful space,” Nick said. “At Villa, we do both." 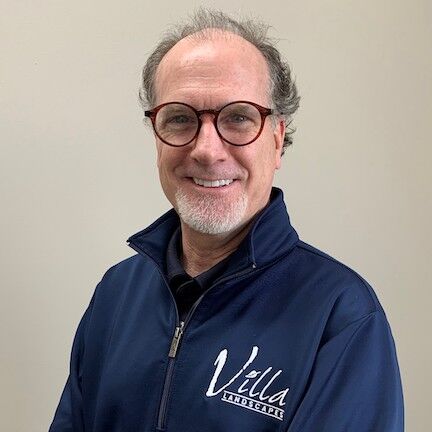 Mark spent much of his youth helping his parents, who were trained horticulturalists, at their apple orchard near Lake City, MN. After graduating from high school, Mark earned a degree in agricultural business from the UW-River Falls, became a master gardener like his parents, and furthered his studies in ornamental horticulture and design at the University of Minnesota. His experience includes landscape design, sales, and project management at several landscaping firms before joining Villa Landscapes in 2007-08. Mark returned to Villa in 2020 and enjoys working with clients who have an eye for quality design and detailed construction. “Villa is unique in that it allows me the opportunity to work on architectural enhancement and lifestyle solutions for clients. Villa also has an advantage with our direct connection to the product manufacturers and the engineering/product support team that stand behind all of our projects.” In his free time, Mark enjoys spending time with his family and nearby adult children as well as home renovation, running, dancing, cooking, films and playing bass guitar. 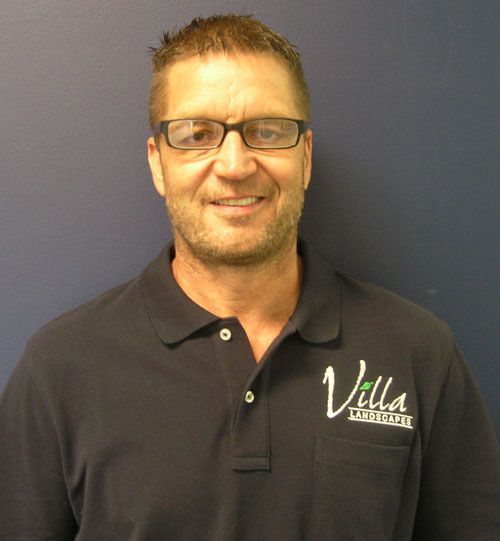 Greg is one of the field superintendents for Villa Landscapes. He has more than 25 years in landscaping, including owning a company and working as a lead foreman at a landscape company. Greg has experience with many landscaping products, including VERSA-LOK retaining wall systems and Willow Creek Paving Stones. “This is a great fit for me because I’ve worked with many customers and landscaping professionals using different products, from simple to complex designs,” Greg says. “I’ve worked along the landscaping spectrum, from sales and accounting to design to installation.” Greg attended St. Cloud State University and lives with his fiancée, Ellen, their dog Izzy, and three crazy, cool cats. He is a freelance writer in his spare time. 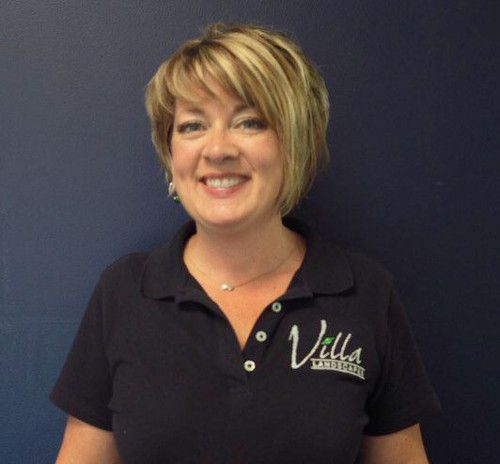 Lisa Jorgenson is the office manager for Villa Landscapes. She has an excellent track record in all facets of administration, with experience in various industries throughout her career. Lisa’s most recent position was as an office coordinator with responsibilities in accounting and finance. "I am excited to work with customers in creating outdoor living spaces,” she said. “Villa’s commitment to customer satisfaction sets them apart, and I am proud to be a part of the team." Lisa’s hobbies include snowmobiling, hunting, boating and other outdoor activities. She and her husband, Wade, live in western Wisconsin and have two adult sons, William and Jacob, and a grandson, Hunter. Lisa and Wade enjoy good BBQ, concerts and boating on the St. Croix River. 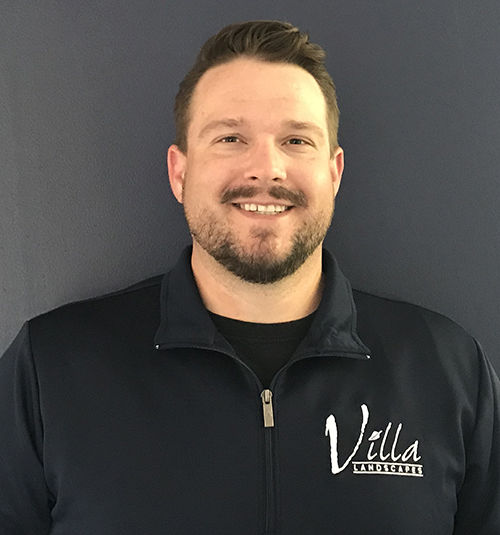 Originally from rural Iowa, Chris Loerts spent much of his youth outdoors working side-by-side with his father on a multi-property homeowner association. A Midwestern work ethic along with his outdoor roots eventually took him to Ketchikan, Alaska, in 2007 to work as a zip-line tour guide. In 2012, Chris moved to Rhode Island to work for a small tree removal business until finally finding his niche in central New York, doing residential and commercial landscaping and hardscaping. In 2014, he decided to move to Minnesota as to be closer to family and friends. He began working as an assistant manager at the Patio Town store in Oakdale and then became manager at the VERSA-LOK Contractor Sales Yard, where he enjoyed working with homeowners and contractors on their projects. When a position opened up as a field superintendent for Villa Landscapes, he jumped at the opportunity to have even more involvement creating dream yards. Chris lives in White Bear Lake and stays busy working on an array of stone, paver, carpentry, sculpture and home projects.